I kept asking myself questions: how are people actually living here in winter? The mountains will obviously be covered in deep snow. How is it even possible to stash enough hay for the cattle during the short summer? We spotted numerous sheep grazing. Their bells were making a sweet sound one could hear almost always. Also, dark brown cows were wandering around both sides of the road, their silky skin was really clean.

In the next national park we went to after Langsua – Rodane - we found several tiny houses as well. Also in Rodane, the area looked unsuitable for year-round living at first glance. Following a trek that started at the feet of the Rodane Mountains, we hiked a dozen of miles up, passing several vegetation zones: a forest of different kinds of trees, then a forest that mainly consisted of fir-trees and birches, then tundra with several small birches. Finally, we arrived at a huge plateau. It was covered with a vast (and wet) carpet of green, white and pink moss and several tiny bushes. A couple of basic houses with a fenced-off yard topped the mossy plateau. The trek we were walking eventually passed the farmhouse and led to a shallow lake with a boat on its shore.

The mystery of tiny houses was solved due to a local farmer we met. The summer houses – called hytte in Norwegian – existed since a long time here in this part of the world, he said. Farmers moved their cattle to the highlands when fresh grass started to grow. This grass is especially juicy and beneficial for the cattle. The small cabins were built for the short summer to accommodate the farmers. With the first snow, the cattle are brought down to the main farm.

Not only did we feel good for the sheep and cows who get to enjoy their freedom and fresh grass, but we were happy for their owners, We are sure it is a great thing for the humans, to spend some time in a minimalistic organic house with almost no cell phone coverage in such idyllic spots.

Nowadays, the old summer cabins may also be used as summer vacation rentals or as winter ski huts. The new fancy summer cabins are being built as well. Even more, the neophyte trekkers may stay there overnight if they are doing a multiple-day hike. There is no reason to load your backpack with a heavy tent, winter sleeping bag and cooking utensils. There is no need to choose between comfort and spectacular views; the cabins do not ruin it, as a big hotel would do, but their impact on the natural landscape is of a beneficial art. It was easy to take some good pictures of Norwegian hutter!

But did people just think only of the aesthetic aspect while building the first summer huts? Certainly, not. Grass and moss provide excellent insulation!

How to build a moss roof in 4 easy steps:

1. Cover the roof with a drainage layer.

2. Put a lightweight soil on the roof – a regular soil may destroy it.

3. Put a vegetation carpet on your roof. You may cut a beautiful moss and grass carpet in a forest – or buy one. 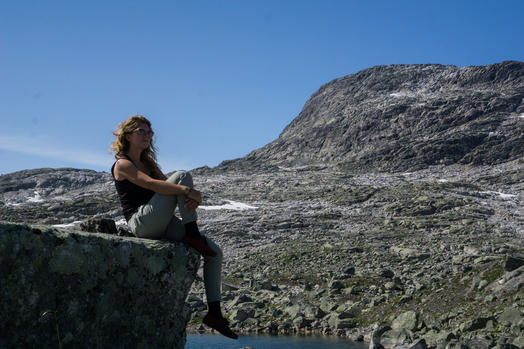 Norway’s tourism motto “powered by nature” reveals that nature is the country’s most valuable tourism asset, and we absolutely agree with that! We united our favorite places in Norway into an itinerary: it consists of national parks, fjords, waterfalls, scenic roads, and idyllic villages. Following our footsteps, you get to see tundra, arctic desert, and glaciers, and your path may cross with that of moose, reindeer, free-roaming sheep and prehistoric furry cows – muskoxen.