When the sun went down in Breheimen National Park in Norway, we descended from the stones-and-glaciers plateau to a canyon. The broad valley was surrounded by vertical cliffs that protected it from ice-cold wind and it felt a bit warmer here, so it definitely was a better place for a night camp. The ground consisted of moss, grass, streams and some kind of white flowers that resembled snowdrops at first glance, but turned out to be like fading dandelions when we took a closer look. For some time we thought that apart from us, these flowers were the only living beings there – even the clouds of mosquitos and ants that had continuously molested us on our trip didn't dare to venture this high. And then with another gust of wind, we heard the bells ringing and the lamb bleating from a vertical slope of the canyon.

We stared at the cliff, trying to find out where the sounds came from. Sometimes, we believed we could distinguish the white dots moving but weren't sure if it was not the evening haze, moving the air.

“Think about the echo”, said Balti after some time. "They can be at another part of the cliff you are looking at."

“So maybe this sheep is actually on the opposite side? I hear the bleating from there as well.”

“No, there is definitely another sheep over there too.”

“The one should be saying “Help me, bring me down” And the other replying “Mate, I am stuck here the way you are.”

“I wonder how farmers are going to bring these guys down when the time comes. Ok, you can hear the bell, but you cannot climb this steep cliff and climb back down holding a sheep.”

This was the way we were chattering, while the light of the long Scandinavian evenings was slowly fading.

The sound of the sheep bells accompanied us during our whole trip through Norway. No wonder why – apparently there are 2 000 000 sheep in Norway. At least that is what Google claims.

“When you’re taking the sheep to their summer grazing land in the mountains you can hear the happy sounds from the herd”, a Norwegian tourist information site I had opened while googling the number of Norwegian sheep quoted a local farmer. Being free in choosing where you want to go is a wonderful precondition for happiness, is not it? No control obsession, no locking the sheep even for the sake of their own safety. “Sheep grazing in outlying fields have free access to whatever they want to eat. That makes the Norwegian sheep happy.”

The sheep on the trails we trekked made the trails livelier. Usually, sheep quickly fled at the first sight of us, but a couple of times they approached us to let us pet them or examined our green-coloured Land Rover by nibbling at its wheels and lights.

Snuggling with baby lambs in Jostedalen National Park, I thought of a beautiful story a German colleague of mine once told me: After the Second World war, his family was forced to leave Austria that was under control of the Soviets. All Germans were required to leave Austria for Germany then. So his parents and he (aged 3 at that time) were walking over the Alps from Austrian Tyrol to Bavaria. According to the family story, they were moving at the slowest pace imaginable, because little Michael wanted to hug every sheep he encountered.

In Norway, you can walk with the herds of sheep leaving their summer pastures for the winter barns. Or watch the flocks climb the mountain trails up in spring. Apparently, you can check the dates when farmers are going to move their animals on the Norwegian Trekking Association site. It is an experience we don't want to miss the next time we go to Norway! 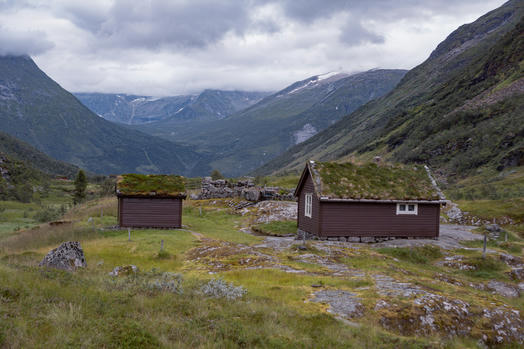